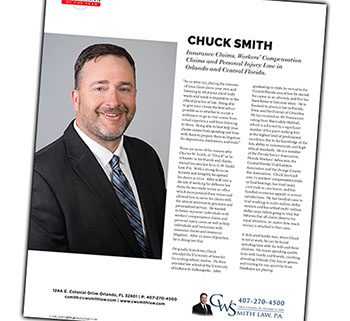 These are some of the reasons why Charles W. Smith, or “Chuck” as he is known to his friends and clients, started his own law firm, C.W. Smith Law, P.A. With a strong focus on honesty and integrity, he opened his doors in 2014. After well over a decade of working for different law firms, he was ready to run an office which incorporated these values and allowed him to serve his clients with the utmost attention to precision and personalized service. He wanted to better represent individuals with workers’ compensation claims and personal injury cases, as well as help individuals and businesses with insurance claims and insurance litigation. After 22 years of practice, he is doing just that.

Originally from Iowa, Chuck attended the University of Iowa for his undergraduate studies. He then attended law school at the University of Indiana in Indianapolis. After graduating in 1996, he moved to the Central Florida area where he started his career as an attorney, and this has been home to him ever since. He is licensed to practice law in Florida, Iowa, and the District of Columbia. He has received an AV Preeminent rating from Martindale-Hubbell, which is achieved by a significant number of his peers ranking him at the highest level of professional excellence due to his knowledge of the law, ability to communicate, and high ethical standards. He is a member of the Florida Justice Association, Florida Workers’ Advocates, the Central Florida Trial Lawyers Association and the Orange County Bar Association. Chuck has tried over 72 workers’ compensation trials or final hearings, has tried many civil trials to conclusion, and has handled numerous appeals in several jurisdictions. He has handled cases to trial resulting in multi-million dollar verdicts and has settled multi-million dollar cases before going to trial, but believes that all clients deserve his equal attention, no matter how much money is attached to their case.

A dedicated family man, when Chuck is not at work, he can be found spending time with his wife and three children. He enjoys spending quality time with family and friends, coaching, attending Orlando City Soccer games, and rooting for any sport the Iowa Hawkeyes are playing.